A downloadable game for Windows

Game suitable for 4 player, 2 players, or 1 player with self-cooperation skill.

Take the role of Decard Cain by identyfing items and giving quests to three adventurers. Game suitable for 4 player, 2 players, or 1 player with self-cooperation skill.

The main player is Decard Cain.  When any Adventurer bring a looted item to him for identification Decard will choose from 3 prefixes and 3 suffixes for that weapon effectively changing it's fighting style.

Decard Cain is also responsible to give to Adventurers their Quests. In practice he places the marker on the ground to which the Adventurer can go.

Role of an Adventurer is quite simple. He can only go towards it's Quest or back to Decard. If he looted an item during his Quest then Decard will identyfy it for him.

[Q][W][E] or (A)(B)(Y) on Xbox360Controller - When pressed an Adeventurer go for the Quest. When released Adventurer goes back to Cain.

Goal of the game is not to beat it but to experience it. Experiment with Identification and see what it changes. Request new Quests from Decard Cain. Communicate! Try going separate or together.  When you have enough fun from looting the items go for the Boss. When the boss is defeated you achieve victory. You loose when monsters kill Decard although it almost never happens.

Scroll of Identification is an entry for Slavic Game Jam 2017 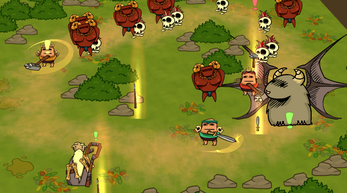